At I Loves The ‘Diff, we’ll jump at any opportunity to explore new bits of our hometown, and armed with a hungry baby my better ‘alf Helena and I are discovering Cardiff nooks and crannies where we can change and she can feed a miniature human.

Seeing as it’s currently Cymru Breastfeeding Awareness Week, and since Helena is currently breastfeeding our four month old baby, Ella, it seemed like a good idea to write about a topic I suddenly know a bit more about (at the risk of being accused of “mansplaining”).

Cardiff has extremely low rates of breastfeeding, and so I reckon there’s nothing wrong with (even men) chatting about the issue to try to ensure more new Cardiffians are given their best possible start in life.

I know what you’re thinking: “You’ve changed.” Time was I’d be extolling the virtues of the local craft beer scene. (Actually, while I think of it, there are new microbreweries popping up in Splott and Fairwater in the form of Splott Brewery and the Arcadian Brewing Co. respectively).

I Loves The ‘Diff celebrates all things Cardiff and highlights issues we feel fairly strongly about, breastfeeding being one of them – mainly a woman’s right to breastfeed in public. But more on this, and good Cardiff places to do it, later. Right now I want to share with you what I’ve recently learned about it…

The breast start in life

For those of you out of the loop, the official line from the World Health Organisation on breastfeeding is that babies should be exclusively breastfed for the first six months.

To quote the NHS’ Every Child Wales website (everychildwales.co.uk), “Babies who are breastfed are more likely to be a healthy weight by the time they start school. They are less likely to have high blood pressure and heart disease then they grow up.”

It’s also good for mums – a breastfeeding woman uses up to 500 calories a day and will be less at risk from depression and certain cancers among other benefits. And on a practical level, it’s free, you can’t run out (demand creates supply), and it’s great not having to sterilise bottles.

So, hooray for the boob. Yet in the UK, less than 40% of babies are breastfeed to six months, and less than 1% of mums breastfeed exclusively at this time.

Dr Kate Boyer, a senior lecturer in human geography at Cardiff University, has studied the subject and sees great disparity across the city.

In Cardiff South, the rate of mums still giving breast milk 10 days post birth is 75% while in Cardiff East it’s just 38%. She sees this “a social equality issue”, with lower income areas where there are younger mums seeing breastfeeding rates drop off much more sharply.

It may be natural but breastfeeding is rarely plain sailing for new mum and her newborn. Having seen it first-hand, no one should be under any illusion that breastfeeding ‘just happens’.

“Neither the mum or the baby knows how to do it at first,” says Helena. “It takes practice. They both have to learn how to do it together.”

Fortunately, help is on hand, mainly in the form of midwives (each of whom seems to have their own handy tip that might work for you), the health visitor, and fellow new mums going through it too.

“I received amazing support in the hospital,” says Helena. “Midwives were on hand anytime day or night to give support and advice. It really helped that I stayed an extra night in the Heath after the baby was born as I gained knowledge and confidence.”

By the way, this might be a good opportunity to say a massive thank-you to the midwives at the Heath (especially Hannah) for all they did for the three of us back in late February.

Once ‘outta the Heath’ support is still very much on hand. “The midwife-run clinic on Crwys Road were really supportive,” says Helena. “It’s a calm, open and very friendly environment where people can get good advice without judgement.

“Even a cup of tea and biscuit and a chat with other mums in the same position was a snapshot of normality in this very new and strange situation for a first-time mum.”

At the end of the day, a healthy, happy baby and mum is the aim. The last thing I’d want to do by writing this post is to apply more pressure to new mums.

Just a few days ago new advice from the Royal College of Midwives (RCM) states that new mothers should be given appropriate support if they make an informed decision to bottle-feed instead.

I reckon this new advice to midwives that a mother’s choice “must be respected” is very welcome and will hopefully make the more ‘hard line’ midwives dial back their fervour a bit. After all, it clearly isn’t for everyone; the world is full of healthy adults who were bottle fed as babies, and the last thing a new mum needs is more pressure or to feel like she’s being judged. Clearly they feel enough of that from within.

“Don’t underestimate the overwhelming need of a mother wanting to do what is natural and the best thing,” says Sue, mum to 17-month-old Iola. “You get a weird sense of guilt for not being able to provide. I was desperate to show the world I could be a proper mum and that meant breastfeeding – ludicrous and bonkers.”

Sue struggled and persevered but says she wishes she had given up after a week rather than persevere through “toe-curling agony” and awful symptoms.

“I sobbed for six weeks solid. I was exhausted. I am so pleased I managed to feed her but I can’t help but wonder if I’d have bonded with Iola sooner because it wasn’t till two months that the problems cleared up and we got the hang of it , and only then I stopped dreading feeding her,” she says.

So where do men fit into this? Um. Well, I’ll be the first to admit that we’re largely unimportant – and it’s this exclusion that may make some blokes feel a little left out.

I didn’t feel this way but perhaps it’s because early on I got to feed Ella with a bottle of expressed milk – a beautiful, messy experience.

A couple of days ago on social media a woman said friends of hers had felt that they had not had the necessary support from their male partners when they were struggling with breastfeeding.

“Isn’t it kinda hard to support? I mean you don’t have a clue, do you?” said my (blunt) friend Karen, mum to Eva and toddler Delyth, when I relayed this to her. And she’s right.

Yet support doesn’t have to be in the form of expert advice. I’m thinking basics here: encouragement, empathising, providing sustenance, and fetching things like the remote control or phone during feeding.

“Thinking about it, I always thought the best support was making sure I was fed and watered whilst under attack from the little cutie,” agrees Karen.

By law businesses must not treat a breastfeeding customer unfairly, or let other customers do so. Personally I have no idea why people would have an issue with what is surely one of the most natural of practices.

“Don’t be afraid to breastfeed in public,” says Karen. “If someone has an issue, it’s their problem not yours.”

Quite. But not everyone is so bullish. “It can be very daunting,” says Helena. “I always have to assess the room before I attempt to do it. Initially I was very apprehensive and felt I might be asked to leave a place or receive disapproving stares.

“I’m not sure where I conjured up these ideas as I’m entering my fourth month of breastfeeding and I’ve experienced no negativity whatsoever.”

“Don’t be afraid to breastfeed in public. If someone has an issue, it’s their problem not yours.”

In answer to questions we put to her, Dr Boyer wrote: “Research suggests that experiences of breastfeeding and ‘local norms’ around infant feeding can be really different from place to place.

A slightly different version of this article was published as our monthly column in the South Wales Echo earlier this week. Having read it, a woman commented that she felt a sense of shaming from other women when using a bottle in public, which echoes Dr Boyer’s comments. This is a depressing whether that perception is accurate or not. At the end of the day, it’s no one else’s beeswax. 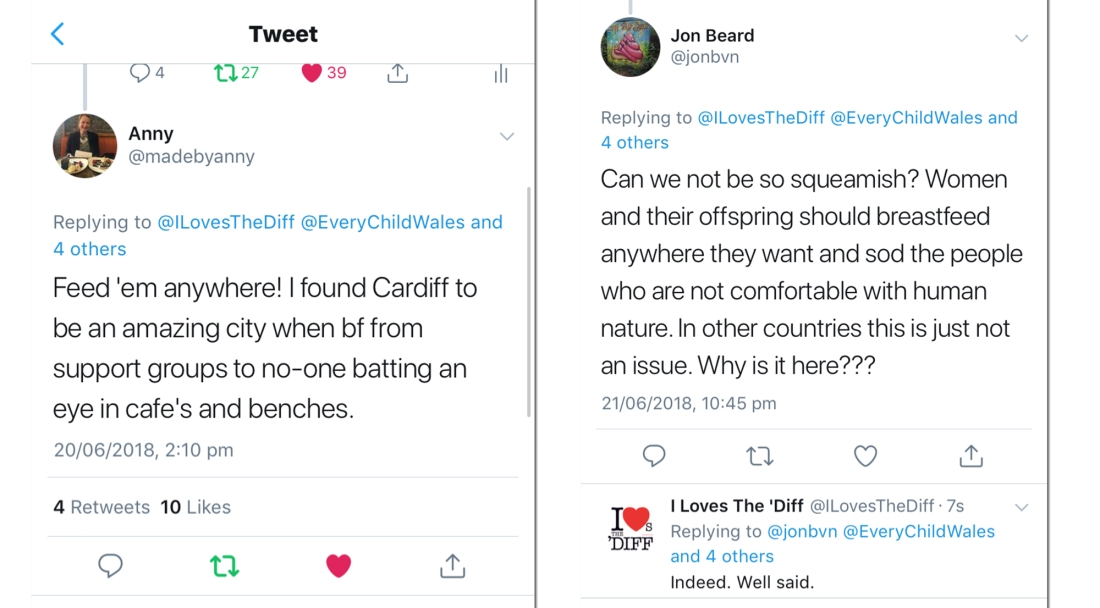 Good experiences of breastfeeding in the ‘Diff

Cardiff has many businesses that actively support mums wishing to exercise their rights. (A shout-out here to the super child-friendly Milk & Sugar in the Old Library – if you’ve not tried it purely as an escape from the madding Saturday crowd, with or without a child, you’re missing out.)

While some larger places even have designated feeding areas that allow for privacy.

“It’s important to get out and meet friends,” says Helena. “Breastfeeding should not be a barrier to this in the early days. Knowing where these private rooms are gave me the confidence to pop into town for a few hours.”

Of these ‘we’ like the feeding rooms in IKEA and Mothercare (Newport Road branch – “great support pillow”). In town, there are top notch, top floor facilities in John Lewis and also on the ground floor in St David’s 2.

“JL has booths with dividers so you get the privacy you need. It’s an excellent feeding area and very convenient, as are those in St David’s 2 where there are family loos, and there’s even a lockable room containing changing area, sink and a sofa. With these nearby, you should consider giving Debenhams’ rather rundown offering a miss.”

Anyway, hopefully someone will find some of this information useful. We’ll try to add more places as we find them. Please feel free to comment below, or via @ilovesthediff on Twitter – and head to ilovesthediff.com to order a Straight Outta The Heath babysuit. Ta!

View all posts by ilovesthediff