If the words ‘daily direct long-haul flights from Cardiff Airport’ don’t invoke some element of excitement in you then perhaps you’re unaware of how far Cardiff Airport has come in recent years and what a significant step forward Qatar Airways coming to South Wales may prove to be.

As of May 2018, Wales will say aloha to Doha – or more likely orrigh’ or shwmae – but the sentiment is the same. By linking to the Qatari capital’s Hamad International, which is the world’s fastest-growing hub airport, opens up Cardiff Airport to destinations across Africa, Asia, Australia and New Zealand. 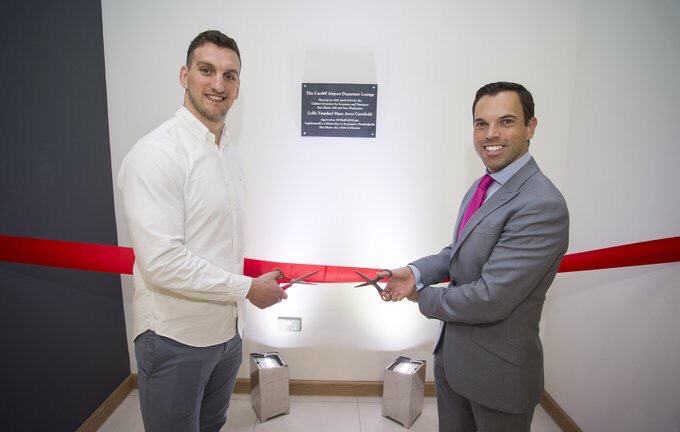 This new Qatari connection is a symbol and an opportunity. It’s a significant milestone in this dramatic comeback story that so many people living here – and abroad – badly want to see.

Last week I had the pleasure of going ‘air side’ at Cardiff International Airport for the official launch of the expanded and improved departures lounge and executive suite.

If you’ve flown from Cardiff recently you won’t have missed the fancy new duty free shop (because you have to walk through it), and chances are you’ll know about the The Beer House, a new bar and restaurant which opened in May 2016. But there have been even more recent improvements costing to the tune of £4 million – “investment into the improvement of the customer experience” which has seen developments to both the terminal and the Airport’s surrounding infrastructure, such as a very smart looking new car hire office and also a meet-and-greet facility (opening soon).

As of this year there’s a new Costa (well, two) which provides an attractive seating area (and I noticed, a surprisingly good range of food options), plus the WH Smith has moved to a far larger space and now sells technology bits and bobs and has a Well’s pharmacy section – handy and much-needed, apparently.

The new Smiths is actually located in a brand new, huge seating space. I was very excited when I had a sneak peek back in February. (Before I realised I then wasn’t allowed to get on a plane and fly anywhere.)

The best thing, aside from all the added room, and the power points in the new seats, is the natural light – something that is so often lacking in airports. There are large windows and even a view of the runway. Call me a child, but I like to watch aircraft land and take off – it seems sad to have the excitement of air travel (can you tell I don’t fly much?) hidden from view so often.

At the official launch event in April, attended by the great and good, Sam Warburton, and a few bloggers “guests were also treated to a limited edition goody bag filled with ‘Super CWL’ gifts, created in partnership with I Loves the ‘Diff to celebrate the terminal developments.” (This is our favourite part of the official press release for obvious reasons!)

Take off of Super CWL

It seems things are really on the up down in Rhoose. It already connects directly with more than 50 destinations, including nine capital cities. Last year saw the number of passengers increase by 9% (it was 16% in 2016), which makes nearly 50% passenger growth since the airport came into public ownership in 2013.

Cardiff Airport’s rise from years of turbulence is in itself a long haul, and there’s a long way to go yet in order for it to realise its obvious potential. But this is a milestone moment: Cardiff Airport has achieved its ambition of gaining a long-haul route.

For Qatar Airways, which hopes to have two million passengers a year by 2022, this is a huge vote of confidence in Wales and our ever-improving airport. Cardiff beat off fierce competition, including from Bristol Airport, to snag this service and so credit is due to everyone at the airport and behind the scenes politically in making this happen. (Personally, I think the clincher was my suggestion for the slogan, “From the ‘Diff to Doha”.)

Doha should also prove to be a destination in itself – especially if Wales qualify for the 2022 World Cup, which Qatar is set to host. That doesn’t sound so outlandish these days, does it, and nor should it be. If Wales as a nation was taught one thing by Chris Coleman and his team, which set the country alight in the unforgettable summer of 2016, is that good organisation, aiming high and self-belief can produce results. Wales has so much to offer, and it’s never been more important to show this.

CWL, to use Cardiff Airport’s IATA code and come across all technical, is also a key component in the region’s future economic prosperity. Wales, in case you don’t know, is a centre of excellence for aerospace manufacturing; there are more than 160 companies in the aerospace game, and they employ more than 23,000 people.

Happily, the Middle East is a key growth aerospace market. A post-Brexit Britain is likely to be a place where connections to growing markets beyond the EU are more important than ever. This new link could help all kinds of businesses throughout Wales and the wider region.

Like so many others, my family have members scattered around the globe. My brother lives in Melbourne, and for us, this Qatar Airways service makes him feel a little closer.

The idea of being able to fly to Melbourne from Cardiff with just one stop is exciting. For Alex, and countless others of the ‘Dai-aspora’, having the opportunity to fly home to Wales directly will mean a lot, just as it will to those of us here who are usually expected to fetch inbound loved ones from distant airports.

I’ve another personal reason for being excited by this development and for having hoped for so long that Cardiff Airport will regain lost ground. I’ve inherited a soft spot for Rhoose from my mum, Maggie, who in her 20s was an air stewardess (as they were then called) with Cambrian Airways and later British Airways.

Maggie still attends the Cambrian reunions and frequently regales the family with often funny stories from her glamorous days and nights spent city hopping on propeller-powered Viscounts and BAC 1-11 jet planes out of Rhoose, piloted by Battle of Britain veterans.

“When we switched to jet planes, we had to up our game – on a Jersey flight we suddenly had next to no time to take passengers’ drinks orders before we were coming in to land,” she says.

Times have certainly changed, and Cardiff Airport’s fortunes haven’t always been rosy, but our national airport is once again upping its game to become a major gateway to the world – and to Wales. Passenger numbers were up by 20 per cent in April 2017 (to 95,780) compared to April 2016, and more than 1.48 million people flew in or out of here in the last 12 months (to April 2018). Already one in four people who use the airport is a visitor to our beautiful country.

Qatar Airways’ coming to Cardiff Airport hasn’t come about overnight. Investment and improvements across the board are helping to produce the impressive statistics that serve to confirm that it is one of the UK’s fastest growing airports.

With long-term plans for improved transport links, mid-term plans for a new terminal, and Qatar Airlines’ Boeing 878 Dreamliners taking off from May 2018, it’s fair to say that Cardiff Airport’s future is brighter now than at any time in the past 20 years.

The improvements since 2013 have been, if you’ll please forgive the metaphor, the taxying into position on the runway before take-off. So buckle up and stow your table. The Doha connection’s here and it’s a big deal. In fact, it could prove to be a game-changer.

Another version of this article first appeared in the South Wales Echo on Wednesday 21 February 2018.

View all posts by ilovesthediff